Now is the time for the burning of the leaves,

They go to the fire; the nostrils prick with smoke

Wandering slowly into the weeping mist.

A flame seizes the smouldering ruin, and bites

On stubborn stalks that crackle as they resist.

All the spices of June are a bitter reek,

All the extravagant riches spent and mean.

All burns! the reddest rose is a ghost.

Spark whirl up, to expire in the mist: the wild

Now is the time for stripping the spirit bare,

Time for the burning of days ended and done,

Idle solace of things that have gone before,

Rootless hope and fruitless desire are there:

Let them go to the fire with never a look behind.

They will come again, the leaf and the flower, to arise

From squalor of rottenness into the old splendour,

And magical scents to a wondering memory bring;

The same glory, to shine upon different eyes.

Earth cares for her own ruins, naught for ours.

Nothing is certain, only the certain spring.
Laurence Binyon

It is an astonishing piece of England, the greatest surprise and delight that awaits the English traveller who has not been this way. It has deep solitudes, majestic heights and the solemn beauty of still water, a grouping of natural beauty uncommon in this country  and here seen at its best.

The Lake Mountains of England spring suddenly and loftily from low green valleys, and so abound in swift changes from soft and quiet beauty to rugged grandeur.  They are a medley of hills closely compressed, as if Nature had tried to place as much of her handiwork as possible on a small show ground.

The Lake District
The King’s England

The King’s England series was a comprehensive County by County guide to the towns, villages and features of England during the 30s.  I remember seeing these rather dusty and worthy books on the shelves of relatives whom we visited when I was a child.  It seemed each home had but one copy, usually that of the County in which they lived and the pages inevitably fell open at the page relating to their own town or village.

These books have been reprinted several times and I picked up a copy last week of this 1937 classic guide to Cumberland and Westmoreland.  Sadly the book does not contain the old Lancashire section of the Lakes, but it does contain the original photographs taken at the time before the crowds came.

This is not a book to be read in one sitting but to be dipped into, it is, after all a guide.  The places are listed alphabetically and there is a worthy interest in local history however minor and obscure, in monuments and buildings, especially chapels and churches.

Here is a  small excerpt taken from the section on Bassenthwaite

It lies at the foot of Skiddaw, and its lake is the third biggest lake in Lakeland. “This house done by John Grave 1736” says one little house in the village.

Bassenthwaite does not rate high in Lakeland scenery. Its commanding feature is the view of Skiddaw, which at some points shows a clear rise from the lake level to the summit. . . Compared with such lakes as Ullswater, Derwentwater, or Hawes Water, Bassenthwaite is just a quiet exit from the Lake Country. 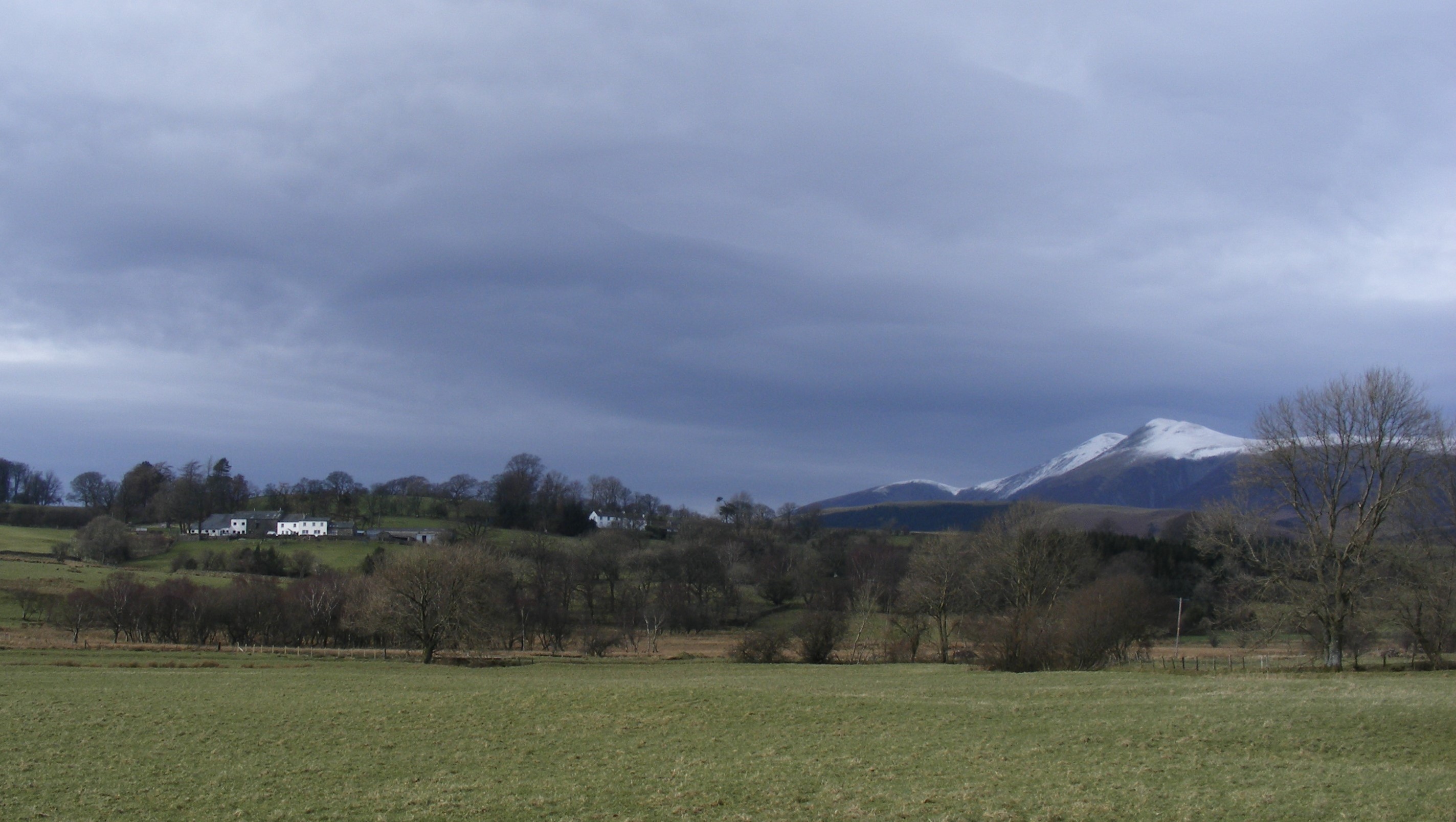 Travelling North-westerly from the Southern Lakes along the A591, described as the most beautiful drive in all England, en-route to Keswick and the Northern fells, climbing Dunmail Raise from the pretty village of Grasmere, beneath the mighty Helvellyn, twisting by the monstrous Thirlmere, you reach the heights of Castlerigg with the splendid views of the Northern Fells before you as you plummet towards the town of Keswick above the shores of Derwent Water.  Before you the Mighty Skiddaw massif, to the left the peaks of Newland and Borrowdale and to the right the mysterious buttresses of Blencathra, curled like an ancient sleeping Behemoth.  How easy to overlook those minor volcanic outbursts that are so dwarfed by the larger fells.

Replete with crags, scree, indeterminate peaks and depressions, tarns, bogs and pastures, High Rigg is like the Lakeland in miniature.  It is a fell I have overlooked for many years, in both senses of the word.  The view from the studio guest house I stay at when I visit the area is of the Naddle Valley defined by High Rigg.  But I too, have overlooked this and neglected it for the surrounding larger fells for over 8 years.  The peak can be reached in a short 20-minute walk from the church of St John’s, or you can traverse the three-mile ridge returning either the way you came, taking time to explore all the various depressions and peaks of this craggy mass, or descend into St John’s vale and walk around the base of the fell.

After a couple of really fine days, the morning sky filled with clouds, the temperature dropped and the winds got up.  The forecast for later in the day was for rain, so only time for a short walk.  With these constraints in mind, and the start of the ascent only three fields away, High Rigg seemed an obvious choice. I decided to leave Heidi and the buggy behind and to make  rare excursion into the wilds with Max.

Roughly following a public footpath from the A591 towards the northerly base of the ridge where lies the Church of St John, you cross two streams, step over one walled stile and through a kissing gate to reach a farm road.  You can choose any way up to the fell but we made a little detour along the road, past the Carlisle Diocesan Youth Centre to walk round the Grade 11 listed building.

With a glance towards Low Rigg and the path to Tewet Tarn,  we turned toward High Rigg to decide on where to begin out descent.  I was joined on my walk by my friend Stefan and Bill, his four-legged companion.  Bill, still a puppy, tried pouncing on Max to entice him to play while Max, good-naturedly, ignored him.

At times we hit upon a clear and obvious path, but for the most part we casually explored the ridges, bumps and depressions of the fell, skirting round icy bogs and stopping frequently to admire the views of the distant fells and lakes opening up before us.  The wind was fresh and feisty at times and having spent as long as we wished at the end of the ridge, we decided to turn round and return along the ridge.

Finding our way home was a piece of cake.  We just followed Bill.  He was clearly keen to get back and shot off ahead of us. Whether he was missing Amanda, the warmth of the studio or the dinner that would be waiting for him, we can only guess,  But he had an unswerving nose for the return route. He even invented a short cut across a steeper incline that we had circumvented on the way up!

My Tweets
An Embarrassment of Riches

Less is not enough.

Always Learning! I'll probably talk about children's books at some point as well.

Antisemitism, from the dark side

Colouring by touch : altering by thought : fed by feeding.

A year of female authors

Providing commentary and research for urban planning and urban renewal

Words and Pictures from the Middle East & Balkans

A world of design

A Cup of Tea With This Crazy Nia
The Mexi Movie II. (closed)

Eye spy, love speak, Volkswagen, or this is how we take word power back.

Walks, stories and musings from the Lake District Fells